skip to main | skip to sidebar

I'll never take electricity for granted again. The last 7 days have been compelling. Sometimes good, sometimes bad and sometimes downright awful. Today, though, I want to concentrate on being thankful. Our power came back on about 7pm Central last night.

I'm thankful to God that he created electricity and the men and women who were smart enough to harness it. Thank you to the Greeks (Thales of Miletus) for discovering static electricity, thank you to Benjamin Franklin, thank you Charles-Augustin Coulomb, thank you Alessandro Volta, thank you Michael Faraday, thank you Joseph Swan, thank you James Watt, Andre Ampere and George Ohm, thank you Nikola Tesla, George Westinghouse and Thomas Edison. Those are the big guys in the world of electricity.

Now for the people who are no less important - thank you sincerely to the men and women who worked day and night to get electricity back to our town and then our neighborhood.

Finally, as the last part of this post, I'm thankful to my family. I'm thankful for the help of my children when we had to bring wood in for our wood stove. Thank you for not complaining too much. I know it was tough this last week, but we did make some memories. We learned that we can occupy our time with things other than Xboxes, Nintendos and Computers. We learned that playing cards can be fun and learning new games can be fun as well! We learned that hot dogs roasted over the fire of a wood stove taste waaaaay better than boiled hot dogs and that Pop Tarts are much better when warmed on top of the wood stove than when they are toasted in an electric toaster. We learned that S'mores are one of the yummiest foods you can make using a wood stove. We also learned how important it is to have deep and meaningful friendships and that sometimes, no matter how independent we want to be, that it's okay to rely on those friends.

I'm thankful to my partner for helping me to get through. You, my love, are the strong one. Thank you for your love and your strength.
Lots of Fashion Love from Lissa! at 7:30 AM No comments:

Okay, I took the link out. I have no idea what the hell they are/were up to. Their web site is gone (as far as I can tell) and I haven't heard from them in forever. So I was wrong. I thought they had a great idea. I'm all for collaboration, but for some reason, I have a feeling they've played a lot of people or they just couldn't get the support from other designers they thought they could get. I have no idea.

So, I quickly take my LM to what used to be Les Belles Isle and it's now some French club. If you've seen my other post, I'm not too proud to admit it, I was wrong. To all of you who were right about them, kudos.

Lissa
Lots of Fashion Love from Lissa! at 7:14 PM No comments:

I know, strange post title. But I'm "wondering" when I'm going to get electricity back. It's Friday, December 14 and we lost power on Monday December 10th at about 9pm. It's been an interesting week to say the least.

There are things you learn about yourself during times like these. Understand, I'm not going to get incredibly introspective and wax nostalgic on Laura Ingalls Wilder or pretend that we're in a similar situation. But priorities change when you have a situation like this.

For the first time since I began designing clothing for Second Life, I've been able to take a step back. I've been able to stay away from the computer (true, I have had connectivity at work and today I am at the University connected via the wireless network at our Student Union) which has been kind of nice. It's nice to be able to log on for a short period of time, check my messages then log off. We have been spending most of the week in the basement in front of the wood stove. Romantic? Sort of... oh, maybe not really. Maintaining the fire has been the big key. I've learned a lot about wood stoves this week. Woot!

One of the biggest challenges has been keeping ourselves sane and the kids occupied. Those of you who know me on a more personal level know that between my partner and myself we have five children. We sat in the dark (semi-dark with an LED flashlight - those are kinda' cool!) playing games last night. We try to get them to read more and have also tried to make sure that they are learning to occupy themselves!

I will post more at another time as I have connectivity. Hugs and love to all of you who might read this.

-Lissa
Lots of Fashion Love from Lissa! at 9:36 AM No comments: 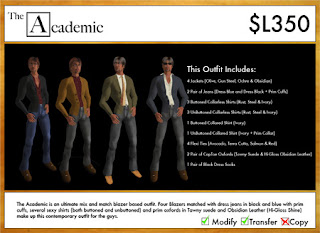 Well, the contest piece is available now. I call it "The Academic". It's the ultimate mix and match blazer based outfit for men. Four blazers matched with dress jeans in black and blue with prim cuffs, several sexy shirts (both buttoned and unbuttoned) and prim oxfords in Tawny Suede and Obsidian Leather (Hi-Gloss Shine) make up this contemporary outfit for the guys.
Purchase it at our main store (Annapurna 121,147,295) or at OnRez.com.
Lots of Fashion Love from Lissa! at 12:26 PM No comments: 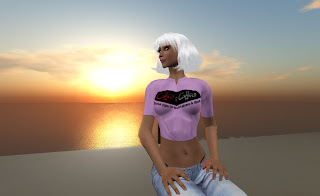 OMG! What a difference!
I downloaded the latest Windlight viewer and my fps is easily 20fps or better. I can honestly say that I'm going to be using the Windlight Viewer from now on. It's not only gorgeous, but now it "feels" fast. More to post later!


posted by Lissa Maertens on Annapurna using a blogHUD : [permalink]
Lots of Fashion Love from Lissa! at 7:08 AM No comments:

I wasn't alive on this date and probably anyone who reads this blog wasn't, either. My grandpa, however, was. He was 16 at the time and like many young American boys/men his age he found a way to fudge his birth certificate and enlisted in the Army. I realize that most of you know why he would have enlisted, but for those of you who don't, this was the day that the Japanese attacked Pearl Harbor and in doing so, pulled the United States into World War II.

I believe my grandpa was a brave man. But to hear him speak about some of these things when he was alive, he would have told you just the opposite. He rarely talked about the war. Some memories are probably just to painful to recount. When he did, though, he always told me, "Lissa, don't ever join the military. You'll end up dead because of someone else's argument." I guess by argument he meant war. I never really asked him to clarify, but I'm pretty sure that's what it was. I hope so, because right now, I feel a true sense of disillusionment toward our government and the people running it. And even worse, I feel such sadness for those who are fighting in a war or trying to put together the broken pieces from a war that in retrospect may not have been necessary.

Please don't misunderstand, Osama Bin Laden and Saddam Hussein are/were awful people and in Bin Laden's case he is someone who takes credit for all of the lives lost in the World Trade Center destruction. He is the enemy. Further, I support our men and women in uniform and thank them from the bottom of my heart for having the deep courage to defend our country and our rights against those who would try to take them from us. I will continue to pray for them that they may all return safely to their families, friends and home.

But to you people who call yourselves servants of the people. You are servants in word only. Your deeds show otherwise. Your continued pay-raises to yourselves, your lax morals, your toe-tapping in bathroom stalls, your disregard for the environment and your continued flip-flopping on moral issues based on polls show that you are nothing more than greedy, self-serving, war-mongers who are hungry for more oil and more money. I'm saddened and sickened by you "officials" who pretend to know what is best for us, but in reality are only doing what is best for yourselves.

When is enough, enough?

Today, I will remember my grandpa and those he served with side by side in the dirt and mud. Those who died on foreign soil and gave their blood, their limbs and their lives to defend people like me who they would never know. I will remember those who have lost their lives in my lifetime fighting in a war that is unnecessary and based on greed. And finally, I will remember that even though my grandpa would not have agreed with what this government has done, he would still fight for this great country and for the rights of the people who live in this land. That's the type of man he was. He was a member of the greatest generation. We have so much to live up to.

I love you grandpa. I wish you were still here. Thank you to you and all who have served before, with and after you.